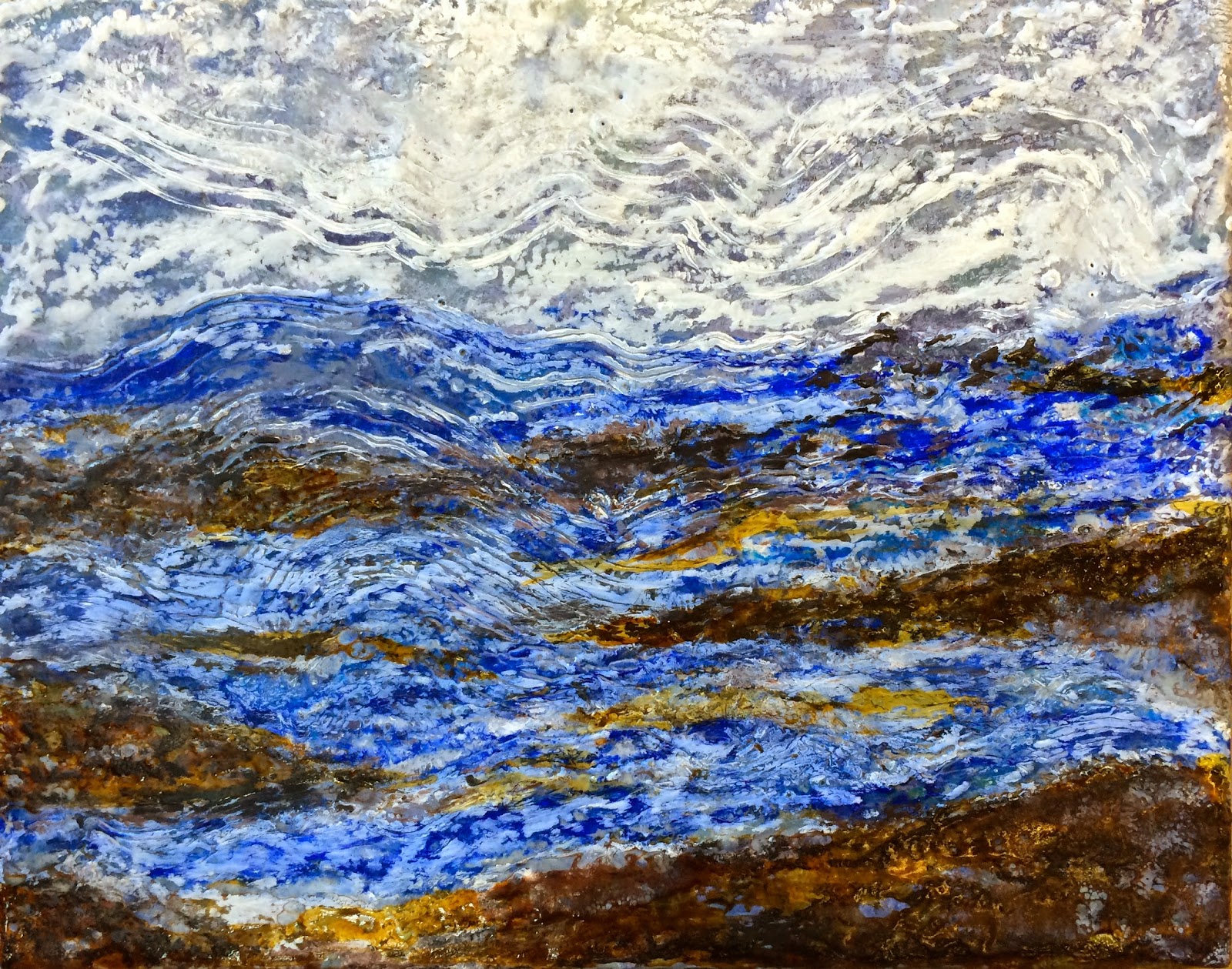 Below is the older version of "Wavy", above is the reworked final version. Most notable change: shades of blue, the addition of a shellac burn, and linear textures. I wanted to create a more impressionistic, recognizable seascape. 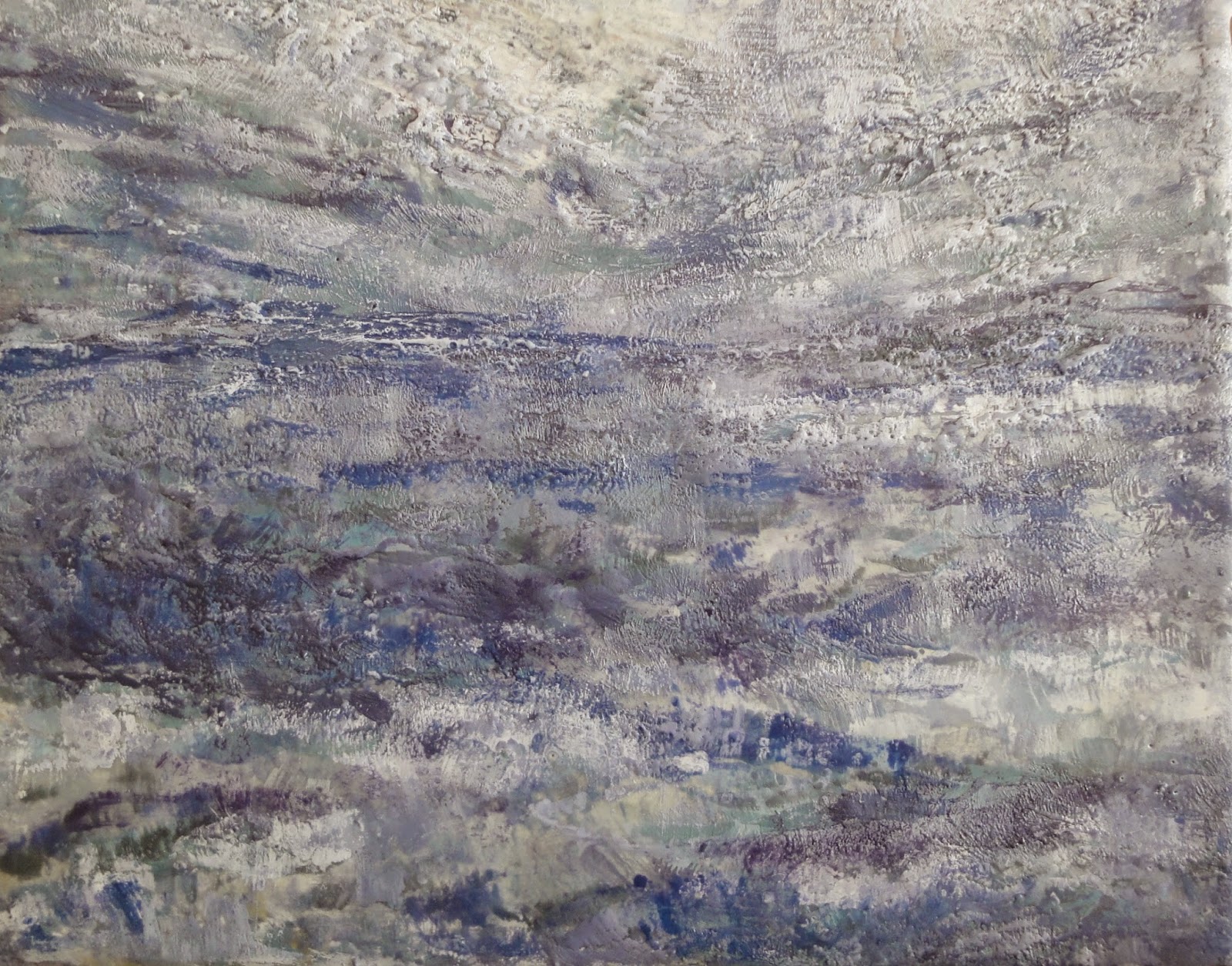 I decided to share with my weekly encaustic class at NSAL how a painting can be reworked, and reborn. The first original version was part of a seascape series from 2011, my initial intention was to lean toward abstraction rather than impressionism. For the sake of the class demo, I decided to incorporate several techniques we had used to transform this.

We shared ideas on how to recycle works in new ways. I am creating a one of a kind art book using some of my favorite poems combined with original monotypes that were "extras". I have always found inspiration when combining poems with visual art... something I did exclusively in my Landscape to Lotus Series.

As I was putting together the book I decided to cut up some of the monotype images to create various collages. The book is still a work in progress but I do have a photo sample to share - 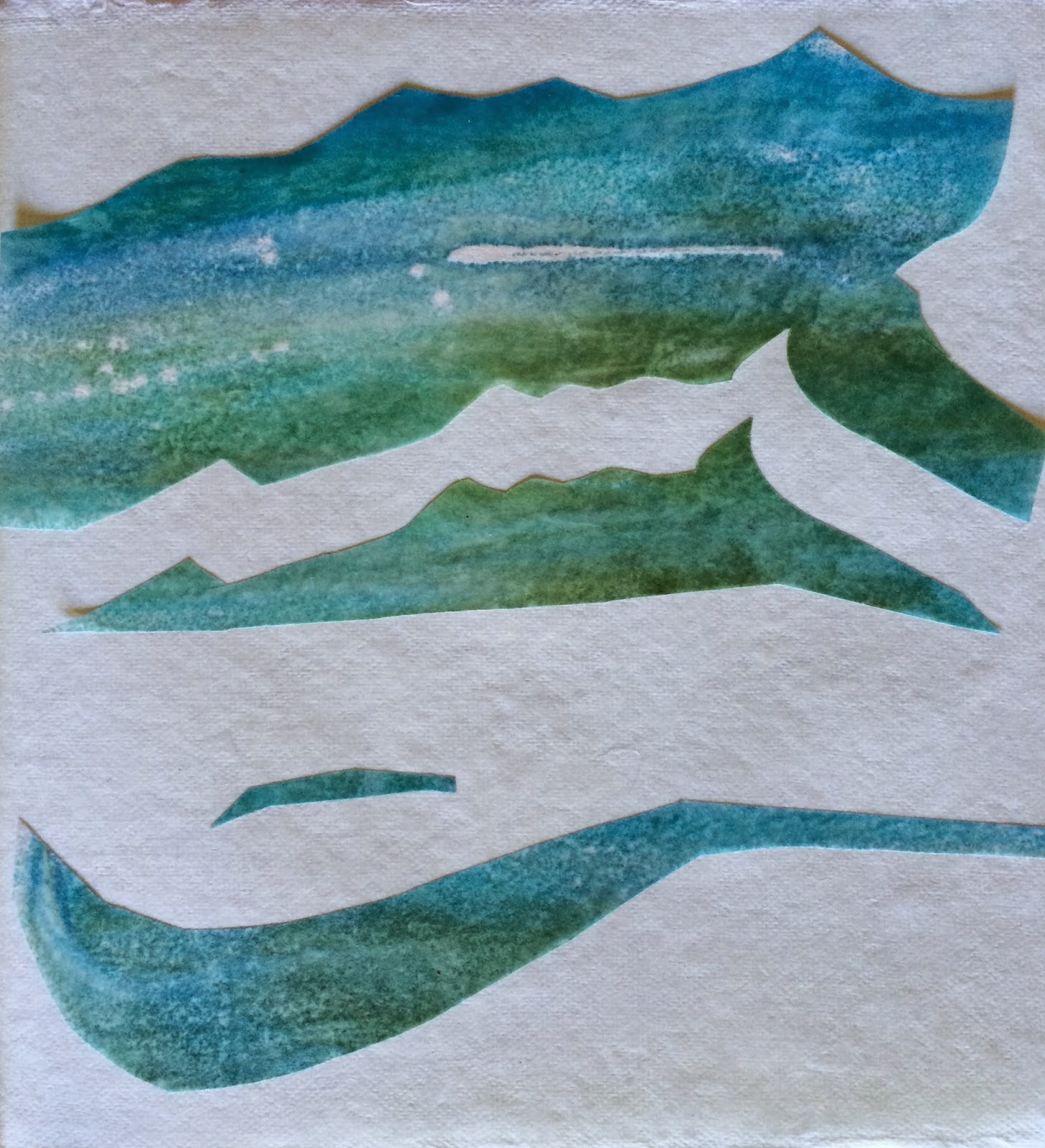 And I am sharing the poem I have coupled with this image. As the book progresses and is completed, I will share more.

Darkness settles on roofs and walls,
But the sea, the sea in the darkness calls;
The little waves, with their soft, white hands,
Efface the footprints in the sands,
And the tide rises, the tide falls.

The morning breaks; the steeds in their stalls
Stamp and neigh, as the hostler calls;
The day returns, but nevermore
Returns the traveller to the shore,
And the tide rises, the tide falls.
Posted by Unknown at 11:34 AM 2 comments: 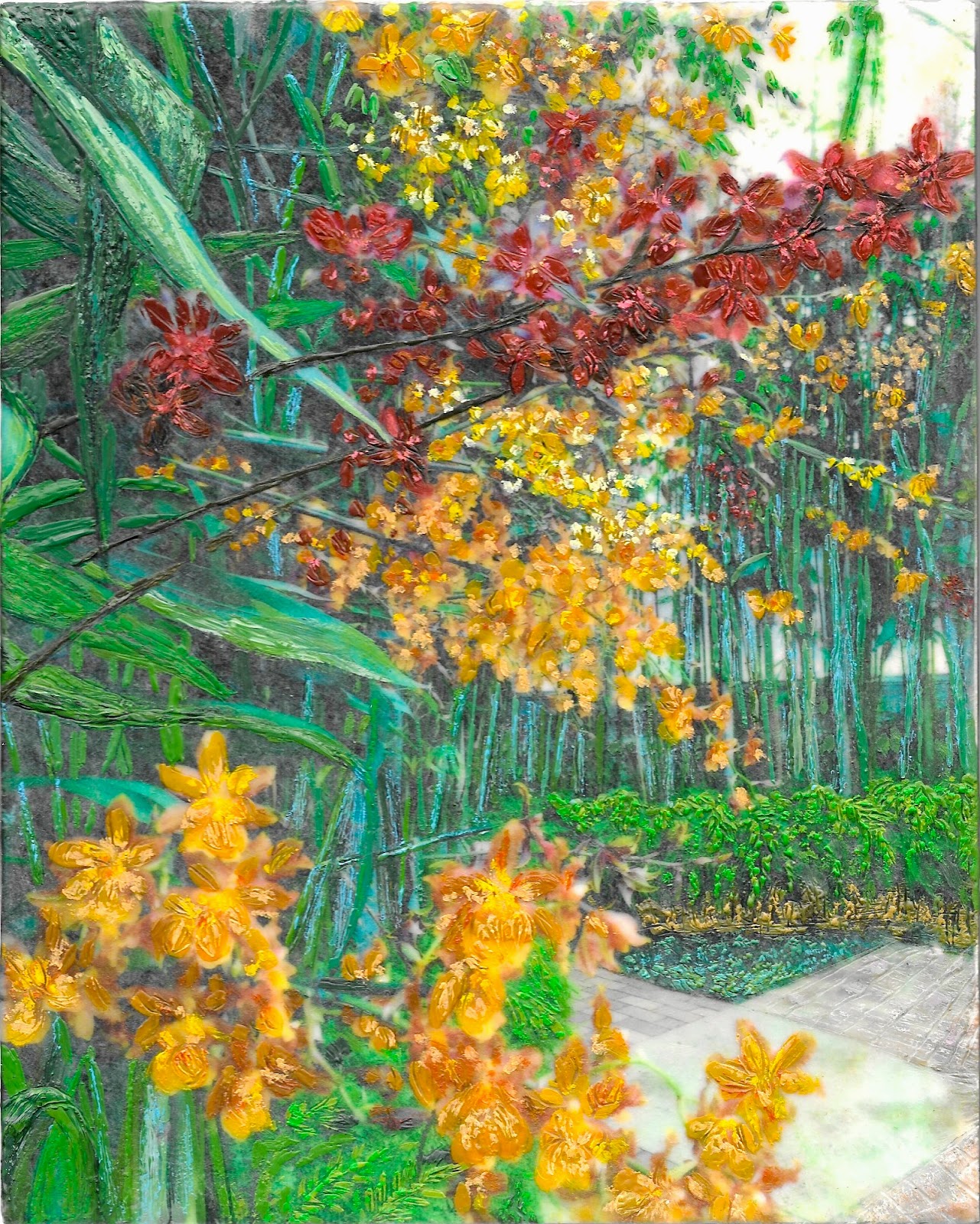 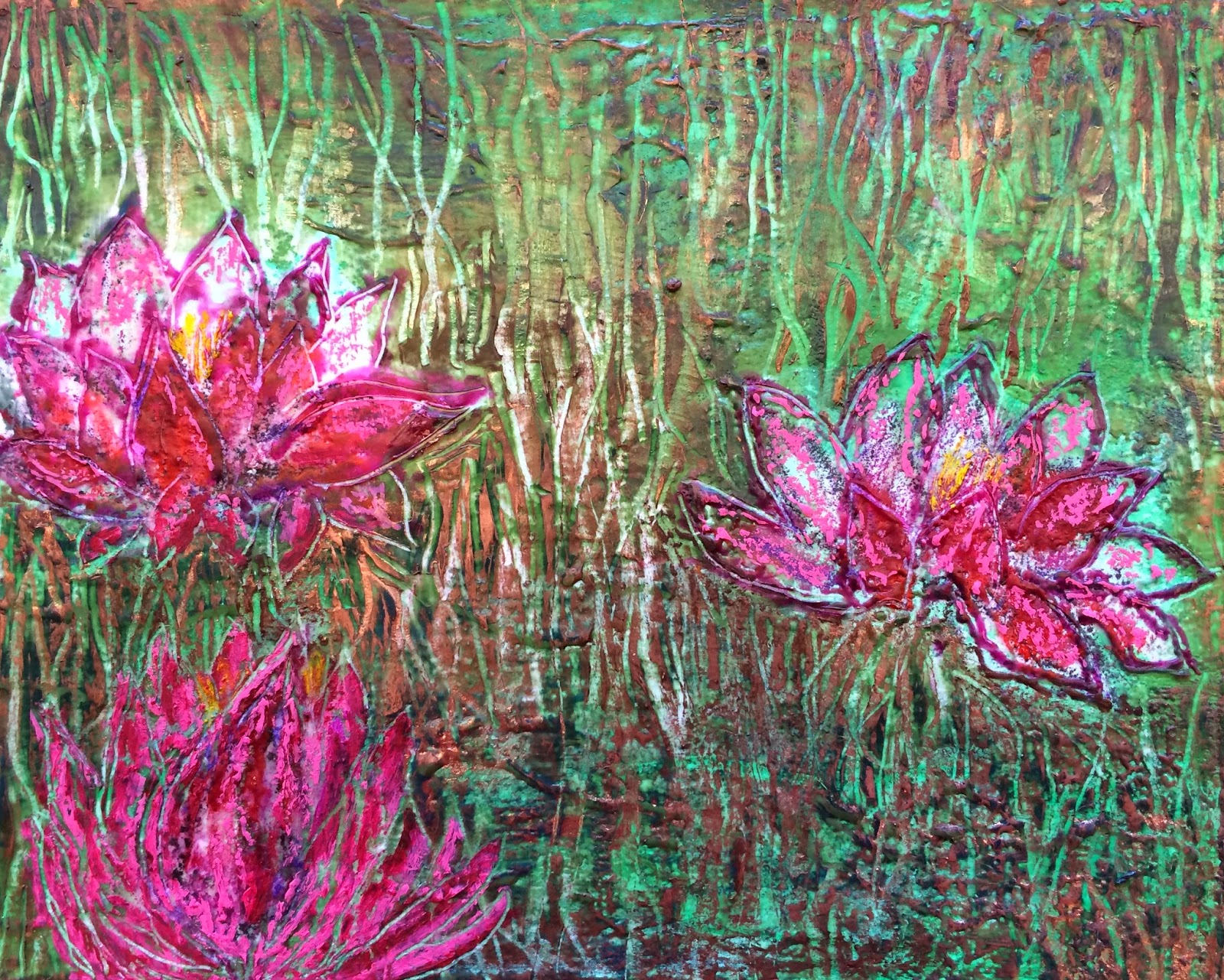 Each week I teach an encaustic painting class at the North Shore Art League. The class size is kept small (mainly because of electrical requirements; griddles and heat guns are essential for each student) and we have been able to cover a wide range of techniques. I feel fortunate that the women in my class are self motivated, wildly creative, and supportive.

Above are two of my recent demonstration paintings from the class. "Orchids" was created from a photo I took at the Botanic Garden Orchid show that just ended. After successfully fusing the photo into wax medium, I added depth, dimension, and details with pigments and oil pastel. This is one of my favorite techniques, allowing me to create a three-dimensional environment that if successful, brings you into another space, a place where you can practically reach out and touch your surroundings.

"Lotus" was created from what started as a simple monotype. I used Kozo (Japanese calligraphy paper) and drew with wax on an anodized aluminum plate, pressed the paper and transferred the drawing with a bamboo baren. I decided to mount the drawing onto a cradled wood panel, then added linear wax details to flowers using a tjanting tool. Once the paper was mounted and secure, I was able to add more pigmented wax, scrape and define details, and highlight with oil pastels without worrying about the fragility of the paper. This particular painting covered a wide range of encaustic techniques, and was the first time I mounted Kozo on wood panel. My monotypes are often framed under glass, treated similarly in presentation to watercolor.

I also love working in a scroll format, working in this shape and size is newer to me. "Undun" is the longest scroll I have done to date; important to me is that the color flows from top to bottom. I am probably going to shorten it to six feet (72" in height) once I attach the scroll hanger, I will hang this with a plain black rod, top and bottom, to weight it down.

Painting with the encaustic medium is one of the most versatile mediums I have worked with and I continue to be amazed at the different ways artists explore and create with wax.
Posted by Unknown at 10:04 AM 3 comments: