Please let me know what you think -
Fine Art by Robin
My new web design, new features, and hopefully easy navigation. I think the link to the "movie" does not work on PC's (I use a mac) but other than that, everything is in working order. Finally, I can relax and enjoy the new look.
Posted by Unknown at 11:47 PM 8 comments:

I have spent the past several weeks learning how to use the apple software for websites and after using web designers for more than ten years I decided it was time for me to find a way to do my own website building and maintenance. There are so many details to work through and I have not decided if my home page should include the paragraph that explains how to view the website, or if it would be best to leave it simple and without all the text. I am not going to activate this new site until September 3 and I am still trying to decide on many of the details within each of the pages. I have so much to learn.
New website, home page 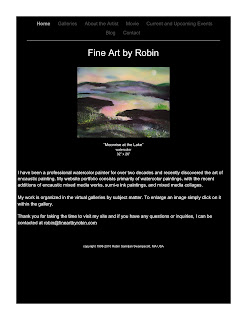 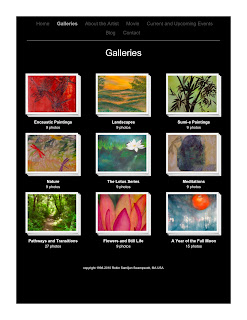 Each of the galleries has it's own page with thumbnail images that can be enlarged. I am still working on details ... whether I should include haiku poetry like I do on my current site ... whether I should also include dimensions and medium, but the general layout is setup with the links to navigate through the site on the top of every page.
I also decided to switch my blog back to the darker background I used to have I (it matches my website). I tried using the plain white background for the past several months because I was told many galleries prefer the white as it makes viewing the art less distracting but I feel the colors in my work are more vibrant and pop when there is a dark background.
It's almost overwhelming, all the different choices with web design, and I enjoy learning and change. I am looking forward to taking charge of my internet presence and I am hoping the hardest part of all of this is getting setup correctly right at the start. I am open to any thoughts and feedback you might have about web design and preferences.
Posted by Unknown at 7:26 PM 4 comments:

The official end of summer is always defined for me by the beginning of a new school year and all that needs to get done prior to the first day of school. This past week I had to retrieve both of my daughters from summer activities on the cape (same aweful drive on 93S, two days in a row). I managed to put quality time in rush hour traffic getting through Boston, yuck! Now we have several days before we are back on the road heading for upstate New York. The challenge is the quick transition from camp mode to school mode, and right now making new art is not going to happen for me until the school transitions for both of my daughters are complete. I miss the meditation that goes along with my art making.
Art news I can share is that two of my pieces now have new owners, both works are personal favorites. When I have the time, I plan on doing several other versions of the white buddha image transfer, and then it will be time to organize my body of work for the Columbus Day weekend Paradise City art show.
Now in Chicago,
"Bamboo", sumi-e and watercolor 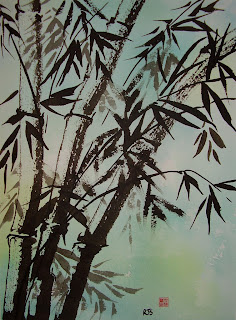 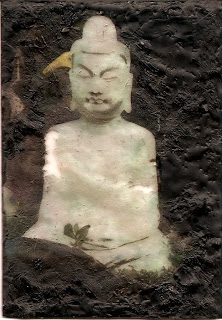 "Pathway", 24 x 18 encaustic image transfer
This is the first encaustic painting I did for the "Pathways and Transitions" series.
Earlier this year I started the process of searching for a new gallery venue that would allow me to show the body of work I developed when I was in graduate school. Initially I had chosen two potential galleries that were both a "notch up" from the local venues I had shown my work in the past. I also had a few more possibilities to pursue if these two galleries rejected me. About a month after I sent in my proposals the first gallery thanked me for my application, wrote about how beautiful my paintings were, and proceeded to suggest where I might want to pursue showing my work. It was one of those letters that you read and have to think about whether you are being rejected or not because the praise you receive doesn't match with the concept of rejection. In my heart I knew this gallery was probably not a good match for me and my work because it was more focused on contemporary abstract art but I figured I had nothing to loose by sending in my proposal. I also think it's a good practice to put together show proposals because it helps to focus on what you are trying to do as an artist, and what makes for a strong body of work.
The second proposal I sent had a March 1 deadline with a notification date of early May. When I still had not heard anything at the end of May I sent an email to check on the status of my application and I was told the committee that decided on show schedules had not met yet and that I would hear by the end of June. This second venue was a gallery connected to a local art association and they had a curating committee to determine their show schedule for the following year. I knew I was ready to show my work this year but it is typical to plan out shows a year (or two) ahead of time.
Patience is a virtue.
June went by, then July, and finally in August I received word that I was accepted to hold a solo show next year. I am relieved, excited, and so pleased that The Willow Community Gallery (part of the Lynn Arts Association) will be hosting my show, "Pathways and Transitions". I feel so fortunate that this was one of my top choices although my show date is not until the end of 2011. My only concern now is that I could sell key paintings between now and end of next year... that should be my biggest problem!
slide show of the series, "Pathways and Transitions"
Posted by Unknown at 7:41 AM 6 comments:

Clouds and the beach 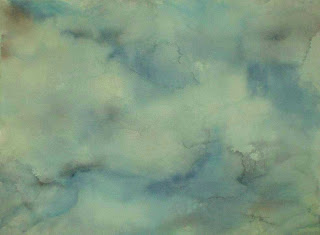 At the beach this week: 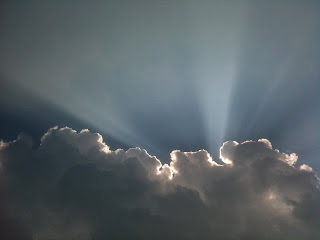 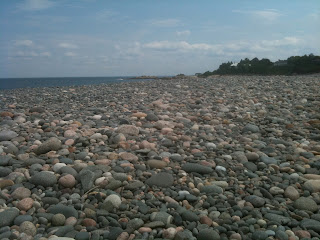 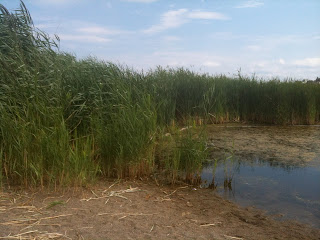 This week I met friends of mine at the beach, something I rarely do even though there are 5 different beaches in town, all of which are picturesque and inviting. I have always thought about the sand, the heat, and the sweat, and for me my summer pleasure has been more attuned to swimming in a 25 yard pool (swimming is my meditation and exercise; I swim all year long). I have to admit, for the first time since I moved here over 20 years ago, I enjoyed listening to the sounds; the waves hitting the rocks, the seagulls begging for food scraps, and the wind almost howling in the warmth of summer humidity. After my beach visit on Tuesday, I went to town hall, got a recreation sticker so I wouldn't have to worry about getting a ticket when I went back the next day (another thing I never bothered doing in the past because going to the beaches has never been on my summer activity list. A town parking sticker is required for residents to park along the beach).
I guess all of this lead me to realizing that what I liked most about going to the beach this week was that it forced me to sit still, enjoy the company of my friends, and pay attention to what was right there in front of me. The photograph I took of the clouds reminded me of a painting I did years ago. To me, there is something quite beautiful in it's simplicity and I am inspired to paint clouds again.
Posted by Unknown at 5:33 PM 3 comments: 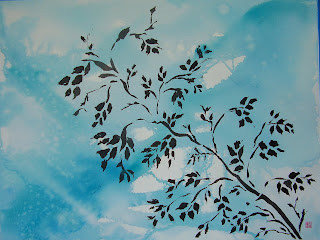 Recently I changed the comforter in my daughter's room and I wasn't happy with the way the wall above her bed looked so I decided to do a painting that matched her bedding - is this "taboo" for an artist to do? I wanted to create the same zen-like feeling in the painting that repeated the pattern in the comforter. I used one of her favorite colors (turquoise) combined with the simplicity of black ink brushwork. My dog also thought it was fun, he refused to move off the bed when I was taking photos! Gotta love Charlie. 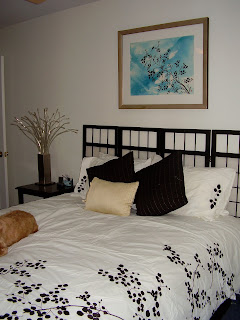 My next project is going to be a landscape painting from one of the photographs I took when I visited Avery Island and I can tell I am just not ready to dig into it yet. I will know when it's time.
Posted by Unknown at 8:45 AM 9 comments: